Opened in 2017, Mersing Harbour Centre has proudly assumed the role of Mersing's one-stop transport shop, previously the duty of the now all but defunct ferry terminal counters. The complex is cool, clean and great for killing a few extra hours also, should your ferry to Tioman depart later in the day. 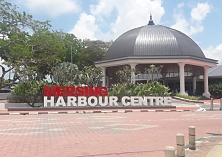 In fact, not only is Mersing Harbour Centre the main place to collect Tioman ferry tickets and bus tickets, once these have been booked online, but Mersing Harbour Centre also offers a retail section, a nice F&B area, as well as counters for booking a taxi, a Tioman hotel or resort, or even adventure trips to Endau and beyond.

It goes without saying that Mersing Harbour Centre boasts plenty of car park space for its visitors. It's said to be bookable, so just send an email to claim your slot in advance. There's even a VIP car park area for dignitaries, although it looks like you need to be either a datuk or at least a tv celebrity. 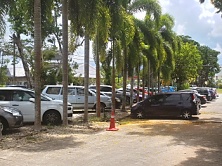 Parking lots available, some with shelter

Looking to stay in Mersing for a night before taking the ferry to Tioman early the next morning? Then you can book your hotel room in Mersing Harbour Centre as well. There are quite a few counters where attendants are willing to assist travellers with booking a Mersing hotel room.

Alternatively, have a look on this site, because rooms bookings can be made online, easy-peasy.

In addition, Mersing Harbour Centre offers a number of useful amenities, as well as a tourism information desk. Let the kids blow off some steam before your ferry trip by letting them enjoy the outdoor playground. It's just off the eatery section of Mersing Harbour Centre, so you can keep an eye on the playground proceedings whilst enjoying a meal or a cuppa. 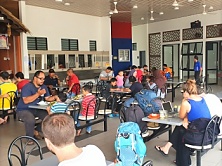 Out with the old, in with the new; Mersing Harbour Centre has ushered in a Mersing for the future. Let the good times roll for Tioman, Rawa, Besar and all the other tourist attractions offered by the greater Mersing area. Selamat datang to everyone from near and far.


Book your bus ticket to anywhere in Malaysia. Your booking is confirmed on the spot.