During the months of November / December to February / March, Malaysia gets hammered by winds of up to 20 knots or more. This wind is part of the yearly monsoon event, dense North-east monsoon winds barreling down the South China Sea, before colliding with Malaysia. Throw the wind-swept 2 meter Malaysia swell into the mix and you've got yourself a real happening combo that's perfect for endless fast and furious kitesurfing action.

Kitesurfing Malaysia - Up up and away!

Other excellent kitesurfing locations during the monsoon are Tioman, Kuantan, Balok, Tanjung Resang, Gorek Bay, Jason Bay and Cerating. These places come with plenty of pretty hefty swell, so you'll be able to hone your wave riding too.

After the monsoon, the so-called intermonsoon months, March to April, winds tend to be light and variable. This is the time to check your gear thoroughly or get the latest board or kite so you're ready for the coming season.

The season that's up next, is the Southwest monsoon, a time when winds around Malaysia are a decent 10-15 knots, more than enough to get your kitesurfing fix. Productive spots to have a go at are at the Southwestern tip of Tioman, just off Kampong Genting, where the SW wind broadsides that exposed part of the island obliquely to create a semi-Venturi effect of up to 20 knots.

The other consistently windy area is at Kampong Juara, at the East coast of Tioman. This bay is blessed with a pretty regular sea breeze. It isn't as strong as the wind at Genting, but it's enough for a solid day's kitesurfing. And since winds here are cross-onshore and the beach is huge, Juara is kitesurfing heaven, because it's easy to launch and easy to come back in, even after you've been becalmed. 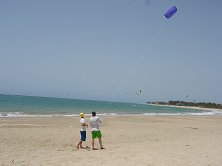 Getting the basics down before heading
for the water

Other great spots for hours of cruising or practising your freestyle moves are along the East Coast of Malaysia, i.e. the ones mentioned above, because during the SW monsoon, Peninsular Malaysia's East Coast get its fair share of wicked side-shore winds. 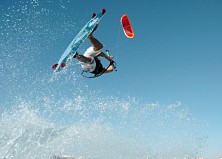 The ultimate high: getting some serious air

Do you want to learn how to kitesurf? Whether you're 15 or 95, simply head to Malaysia for a weekend of kitesurfing classes with one of our kitesurfing instructors. Kitesurfing is one of the fastest growing sports world-wide. And small wonder, given the relatively easy learning-curve, the awesome air-time and the high-octane record-breaking speeds that kitesurfers routinely attain.

Our officially IKO-certified kitesurfing instructors are not only experts at passing on their kitesurfing skills, but they never lose sight of their number one priority: your safety.

Next step, launching the kite from the shallows

Our kitesurfing course is broken down into separate modules so you can complete each one individually till you've done them all. Alternatively, you can just take a few clinics by the hour to polish your skills and top up your confidence. Should weather conditions change to unfavorable, you can always come back and pick up where you left off.

Kitesurfing Malaysia offers various kitesurfing lesson packages, as well as kitesurfing gear rental, so fill in this form if you're interested in feeling the rush of kitesurfing.

I want to thank you again for all your help with this trip and arrangements. You have been the most helpful person I have ever dealt with on these type matters!

The service you offer is fantastic! I will definitely recommend you to my contacts!

Thank you very much !! I am very pleased to have met you and your professional help! Best regards.

I thought the service you provided was terrific - it certainly helps travellers make the journey much easier.

We had the most wonderful time at Tioman, thanks to you and your expert guidance.

Thanks Bryan! You have been absolutely wonderful to work with. Thank you for all your help and your amazingly quick communication.